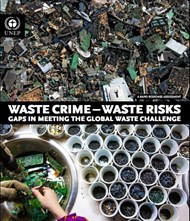 Up to 90 per cent of the world's electronic waste, worth nearly US $19 billion, is illegally traded or dumped each year, according to a report released by the United Nations Environment Programme (UNEP). Each year, the electronic industry - one of the world's largest and fastest growing - generates up to 41 million tonnes of e-waste from goods such as computers and smart phones. Forecasts say that figure may reach 50 million tonnes already by 2017. A staggering 60-90 per cent of this waste is illegally traded or dumped, according to UNEP's "Waste Crimes, Waste Risks: Gaps and Challenges In the Waste Sector", launched in Geneva, at the Conference of Parties to the three major conventions addressing the global waste issue, the Basel, Rotterdam and Stockholm Convention.