Global strategy for the control and eradication of PPR 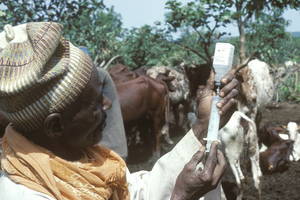 Peste des petits ruminants (PPR), a highly contagious viral disease affecting sheep and goats, causes a staggering USD 1.45 billion to USD 2.1 billion in losses each year. Since it was first identified in Côte d’Ivoire in 1942, PPR has spread to around 70 countries in Africa, the Middle East and Asia − regions that are home to over 80 percent of the world’s sheep and goats and to more than 330 million of the world’s poorest people who depend on them for their livelihoods. Economic losses caused by PPR strike at the heart of vulnerable livelihoods as well as national and regional livestock production. Countries have experienced cumulative yearly losses ranging from tens to hundreds of millions of US dollars. Eradicating PPR will help improve food security, nutrition, incomes and livelihood resilience of millions of poor farmers around the world. In response to calls from member countries, the Food and Agriculture Organization of the United Nations (FAO) and the World Organisation for Animal Health (OIE) have taken the lead in developing a Global Strategy for the control and eradication of PPR.