Whose ivory is it anyway? 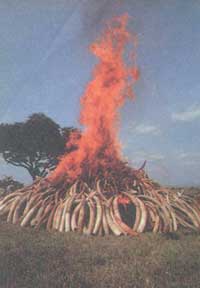 IN LATE 1989, Kenyan President Daniel Arap Moi demonstrated his government's commitment to the preservation of the elephant by setting fire to nearly 12 tonnes of ivory worth US $3 million. Moi's dramatic act was the climax of a sustained campaign by conservationists, which caught the hearts of many across the world. The campaign focussed on the savage decimation of the elephant for its valuable tusks, raising the probability of its extinction within just 20 years. Steinway, the world's premier piano manufacturer, received hate mail and abusive telephone calls accusing them of elephant murder, because ivory is used to make keyboards and western conservationists sounded the slogan, "Only elephants should wear ivory."

The campaign culminated in October 1989 in a worldwide ban on the trade in ivory and the elephant was declared safe.

But the campaign has another side, which received relatively little publicity. In other parts of Africa -- especially Zimbabwe and Botswana -- the elephant population had stabilised or was increasing, according to studies by the World Conservation Monitoring Centre. Zimbabwe, for instance, exported 94 tonnes of ivory between 1979-87, while its elephant population increased from 30,000 to 43,000. In contrast, Kenya exported 131 tonnes but lost more than 70 per cent of its elephants. Both Zimbabwe and Botswana bitterly opposed the ban, contending it would threaten -- not save -- their elephant population. But success, unfortunately, is not as important in a world of media hype as failure and the lesson to be learned from the success of the two countries in elephant care was ignored.

The key to their success was the involvement of village communities in the protection and management of the herds. For instance, Zimbabwe has a programme known popularly as campfire, which allows people to own game on their land. Rural development programmes based on wildlife rely on the elephant to provide the biggest slice of their income. Local tribal councils earn from tourist trade and when the animal is killed, every bit of the carcass is used, with the meat going to local people and the skin and ivory to international trade. The proceeds are ploughed directly into conservation, as well as to compensate local communities for the damage caused by elephants to their crops.

Officials from Zimbabwe argued, "No farmer will tolerate elephants (which trample fields and smash water points) when they are valueless and the ban will have the direct effect of making the animal extinct on tribal lands." And, the Zimbabwe officials noted pointedly: "There are not a lot of elephants in people's backyards in Kent or Connecticut." They stressed that once people lose interest in elephant protection, the government would not be able to fight poaching. From Zimbabwe, reports indicate poaching has increased, the illegal ivory trade continues and the people have lost interest in protecting elephants.

Western and Kenyan conservationists, however, bitterly dispute the Zimbabwean claims of successful management of their elephants. At the height of the controversy, Kenyan newspapers published a cartoon saying, "Zimbabwe manufactures ivory and lies, lies, lies." Zimbabwe and Botswana continue to appeal against the ban but in doing so, they face the wrath of western media.

There are many lessons to be learned from this controversy by other developing coountries, where the relationship of local people to barricaded sanctuaries is stretched to breaking point. The approach of wildlife managers in all developing countries has been to keep people out of environmental concerns and then make investments to police it. "Keep the people and their animals out, they are the biotic interference, the poachers," conservationists complain. And, so, the result is a growing antagonism in the people against protected areas.

In India, for instance, unless the government guards its national parks and sanctuaries with warlike care, they will not be protected from the people and environment will rapidly become a law-and-order problem.

More importantly, it must be realised that the Zimbabwean model of nature conservation or the Chipko model of afforestation in India were solutions born out of Third World cultures and realities. The newfound global interest in environment, on the other hand, is pushing the world towards uniform global solutions. The growing power of intervention by western consumers, however beneficial it may be in some cases, must be viewed against this danger.