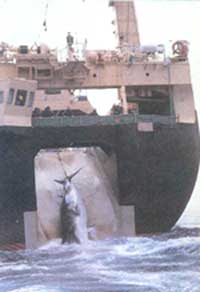 Norway, Iceland and Japan have all faced pressures and threats of green embargoes over their demand for whaling quotas. These countries want the right to harvest whales "scientifically", particularly the minke whale, a smaller and supposedly not endangered mammal. In July 1990, the International Whaling Commission (IWC) met and, under intense pressure, decided not to lift its moratorium since 1986 on commercial whaling. An annoyed Japan argued that whale meat was part of its cuisine and opposition to its demand for whaling quotas was a form of cultural imperialism. "Anglo-Saxon nations seem to think their values are the centre of the world," the Japanese complained. As for Iceland, when it threatened to pull out of the IWC, the US immediately threatened to ban imports of Icelandic fish, which would cost about US $200 million annually.

In 1992, Iceland, Norway and Japan called again on the IWC to lift the moratorium and Iceland has since quit the IWC.